Dad Number One and His Deutsche-Bonnet Racing Car 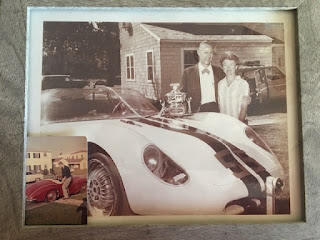 A brilliant engineer, my father once tried to explain aerodynamics to me on a cocktail napkin. I wish I’d saved the napkin, because to me every liftoff still seems more magical than mechanical. I feel that way about the amazing life he lived, as well—racing with Sports Car Club of America (SCCA) and investigating plane accidents for the Boeing Company both in the states and overseas. The limited time we had together between planes was enriched by his sharing his passions. He took me for a couple of racing laps around Seattle International Raceway in his red Dino Ferrari, flew me to visit him in Japan, and got me a guest passage on a delivery EL AL flight with stop-overs in Europe on our way to experiencing the incomparable energy and history of Israel. On the way over, I got to sit in the co-pilot’s seat of the new 747 and switch on lights while cresting the top of the world. And after celebrating our last night in Tel Aviv dancing to a Welsh band until five in the morning, he managed to find me a bed to catch a nap in on the flip-down seats behind the pilot as we flew to London. 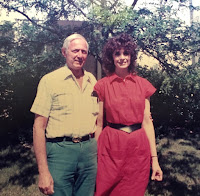 Whether piloting his Deutsche-Bonnet to yet another victory or restoring one of only five Abarth Zagatas ever built, his considerable skills earned him the respect of a multitude of like-minded car enthusiasts and drivers and made him friends all over the world. Dad lived a huge life with such enthusiasm and intensity he was a hard act to follow.
at September 19, 2021 No comments:

THINGS MY RACING FATHERS NEVER TAUGHT ME ABOUT CARS 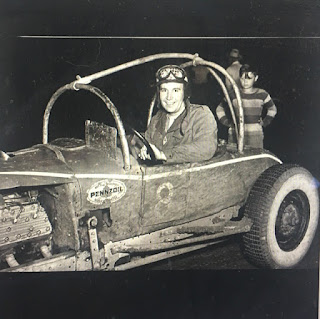 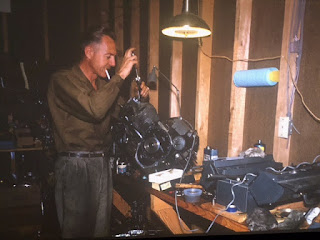 These guys (Frank Manley, below, and Frank Lies, right) raised me, and yes I spent A LOT of time in garages and at tracks. But they didn't teach me much about cars--forcause I'm a girl, I'm guessing.
But I managed pretty well on my own.
For instance, if your battery cables are loose on a '55 chevy that goes 103 in a quarter-mile and you have a portable clothes iron in the backseat (no idea why, now, but there it was), you can use it to hammer nails in next to the cables and get the battery to work. Probably not recommended.
And if the car still won't start, you can leave the hood up in a shopping center on 13th Street and Oliver in Wichita, Kansas, and eventually a sympathetic woman will stop by and pour her coke over the cables to get them cleaned up--and get the car started.
And if you wear a a yellow-lace two-piece bathing suit and sit with your legs in the engine compartment while holding a big screwdriver and can of Gunk, guys will pull over and offer to help you clean that sucker right up.
Lies did quiz me one day about my red Corvair convertible with the 8-track player and Muntz speakers in the doors:
Lies: Have you noticed anything funny about your car lately?
Me: Yeah. It's pulling to the left a little.
Lies: What do you think might be causing that?
Me: Well, the guy at the gas station said I need an oil change.
Pause
Lies: I'm sure you do. You also have a tire going flat.
Luckily, I amused him more than I irritated him. Of course, the bar was pretty low--forcause, you know, a girl in a garage.

Years Beyond the Finish Line 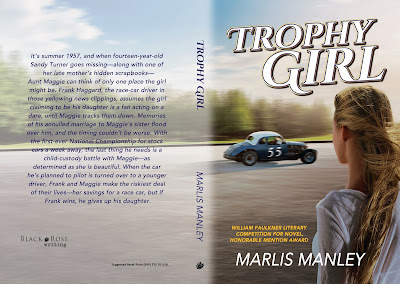 TROPHY GIRL excerpt, page 20, for fun--Now available for pre-order with a 15% discount using code preorder2021 before launch September 30Th: at https://www.blackrosewriting.com/womens/trophygirl.
OFFICER MCDONOUGH motioned for Frank to follow him to the parking lot, well away from where Sandy stood by the open door looking back and forth from them to the girl in the bed. He placed one foot on the bumper of Frank’s ‘55 buckskin-and-white Mercury and bit down on a toothpick. “So what’s really goin‘ on here?”
Frank gazed out across the lot and patted his chest in a nervous reflex, feeling for a pack of cigarettes. “You wouldn’t happen to have a smoke on you?”McDonough pulled out a red-and-white pack of Winstons and tapped the top against his index finger to coax a cigarette out.Frank took it and put it between his lips, then ran his hand down his hip, getting it caught in the folds of the bed spread. “Shit! Gotta light?”McDonough lit Frank’s cigarette, then one for himself. “So, Frankie. Is she your kid or not?”
Stay tuned!

TROPHY GIRL IS OFF TO THE RACES! 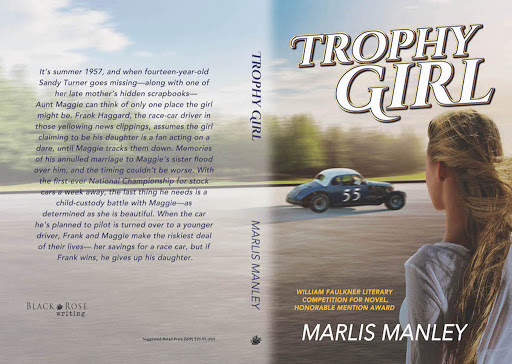 And I'll be signing copies at the Grand National Race the novel is centered around.

C. Ray Hall (former owner of 81 Speedway in Wichita) who is organizing the GRAND NATIONALS has invited me to set up a book table in front of the grandstands July 15, 16, and 17--and in the pits Saturday morning. When C. Ray and I were track rats, I NEVER got to go into the pits until after the races were over, forcause I'm a girl, you know. 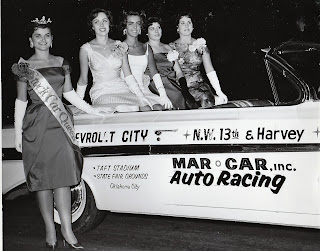 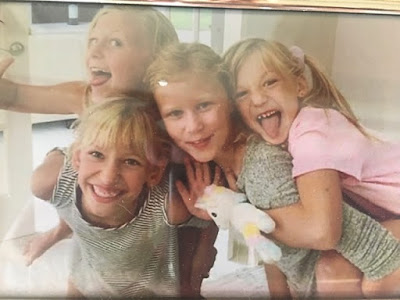 My starter husband was a great joke teller. Me not so much. I once tried to retell a visual joke of his where he wiggled and flourished his index fingers and thumbs forming two circles (think circus music here), put them behind his head, and ta da! Out from behind his head they came, magically hooked together!!!

Simple and silly and what could go wrong, right?

So one day I decided to share the joke--made two circles, hooked them together behind me, and then . . . wait, what?!? I'd put my arms behind my back. 😆

Eventually, I just turned around to reveal the "magic," the joke being on me.

May we find much to laugh at as we emerge from our Covid cocoons. And if you have a funny to share, as Pops, my favorite character in the novel I'm currently writing, says, "I guess that'd be awright."

A Trip to the Principal's Office--Half a Century after Graduation 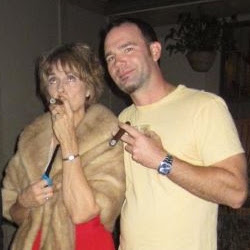 I sub in our little town--K through 12. I'm nice, I kid around, I teach all I can when I can, and encourage kids to apply themselves. I teach them the one thing they'll never get any more of is time. The little ones make me cards with hearts  and write stories about how I fight off the evil pop quiz monsters. The middle graders write, "Ms. Marlis is the best!!!" on the white boards, a standard and acceptable form of sucking up.

We do yoga, the starfish stretch, and for the more anxious kids we do "tapping." You can check it out for yourself: https://www.google.com/search?q=tapping+solution. An anxious second grader with chronic headaches and stomach issues, who wanted only to be allowed go home, let me teach her to tap, and two weeks later ran to me on the playground all bouncy and bubbly to report it was working, and her mom and teacher were delighted with her improvement. (She's older now, so instead of running to me for hugs, we grin at each other and tap our chins in a private greeting.)

Just today I got an affirming high-five in the high school gym from one of the cool boys and the usual hug from another kid who seems to have made me his pet sub. You get the picture. I do okay.

So . . . when I got a call from the principal of one of the schools to come to the office to "talk," I was not only surprised, but as apprehensive as when I was a teen. Seriously? A formal meeting in her office?

The walk down the hall was reminiscent of other walks of shame more than half a century ago. Yes, I really did cut class, and yes, one day in 9th grade I really did not even bring shoes to school to wear, and so on. My junior-year English teacher explained that I was an A student doing B work and getting a C because I was so disruptive in class. But that was then, right?

When the principal smiled and asked me how I thought my subbing was going, the red flag shot to full mast and began flapping. Pretty well, I said. Was there a problem? Well, yes, in fact, there had been a problem reported . . .

When the 7th graders asked me if they could work with partners, I asked if they usually did, and they answered in the affirmative, so we partnered up. And, yes, it got a little loud. Enough so that I put two pairs in the hall to spread them out more. And so I didn't hear the heated exchange of insults between two boys in language that is not appropriate. As it would happen, some other students overheard and ratted them out.

Lesson learned: if it's not written down in the sub instructions, don't go there. Regardless of how many of the darlings insist it's really really okay.

A pleasant chat followed, and I said I'd get stricter with the kids. I wrote an apology to the teacher, who wrote a lovely "not-to-worry" email back.

And what I was thinking was how lucky they never found out that the H.S. band convinced me they could stand on their chairs if they'd memorized their parts. My first-born daughter, who teaches fourth grade, sent me a big MOM! text and talked about liability insurance. No students or horns were harmed, but I've made sure they keep their feet on the floor.

And I'm pretty sure the art students who waved and laughed at me through the window when they realized I'd locked myself out of the room did not pass that news along. Why would they give up the leverage?

And I'm truly grateful that the disgruntled boy in the fifth grade who kept insisting he wanted to work with a partner didn't tell his teacher that I told him--with a tad of frustration, I'll admit--that what I wanted was to go to a dance in a red dress and drink a beer, but that that wasn't happening either. (Who knew that beer--which echoed throughout the room in whispers--was a trigger word?)

In English class last week when I had received written instructions that no one was to leave the room for anything but a trip to the bathroom, I finally got them to word their requests to leave "appropriately" (I suspected such devilry as runs to a locker for a forgotten item or the refilling of a water bottle). I'm learning how to survive the system all over again. And now, when they try to tempt me into bending the rules, I just tell them I've already been to the principal's office and I'm not risking that again. It's given me quite a lot of street cred.

Dad Number One and His Deutsche-Bonnet Racing Car

A brilliant engineer, my father once tried to explain aerodynamics to me on a cocktail napkin. I wish I’d saved the napkin, because to me ev...